Why I’m tired of the ‘danger phrase’ – or:
Can LRS be safe and fast?

Yes I do understand that nobody wants to be held responsible for a potential imitator’s accident.

But what irritates me are all these tutorials that tell me I actually shouldn’t do LRS because it is genuinely dangerous without going into details of the specific dangers nor offering measures to address them.
I believe: Dangerous is not primarily WHAT we do but HOW we do it.
Apart from the fact of being alone out there, I do not see why any unjustifiable risk should be inherent part of rope solo climbing.

Or in other words: There’s got to be a relatively safe way of climbing solo.

After quite a bit of thinking, experimenting and re-thinking – I have found a setup that I can justify to my family and enabled me to climb an 835m / 21 pitch route solo in under 12h.
Now I would like to share my experience in order to contribute to an objective discussion.
I will do so by starting from the modifications and specific techniques, followed by the reasons for me to deploy them.
My modest contribution will be closed by some open questions/ideas for further discussion.

Head and shoulders (A and B)

I see two equipment measures to address an LRS-specific and relevant danger: unconsciousness and consequently a hanging trauma.

What I am most afraid of is an upside-down fall or rockfall with unconsciousness as a consequence. Without prompt rescue, hanging in a normal sport climbing harness unconsciously will most likely turn into a serious situation. Have you ever tried what happens when you imitate unconsciousness while hanging in a harness? No good!

A chest harness seems to be the logic answer. But I need to do more research regarding the harness question (Do chest harnesses imply secondary risks?). For the time being, I work with an improvised upper part built with a 120cm sling. This feels better to me than a commercial one I’ve tested, especially under a backpack.

Furthermore, if your climb is within mobile network coverage, Specialized’s helmet sensor ANGI may provide some safety in case of a hard impact. 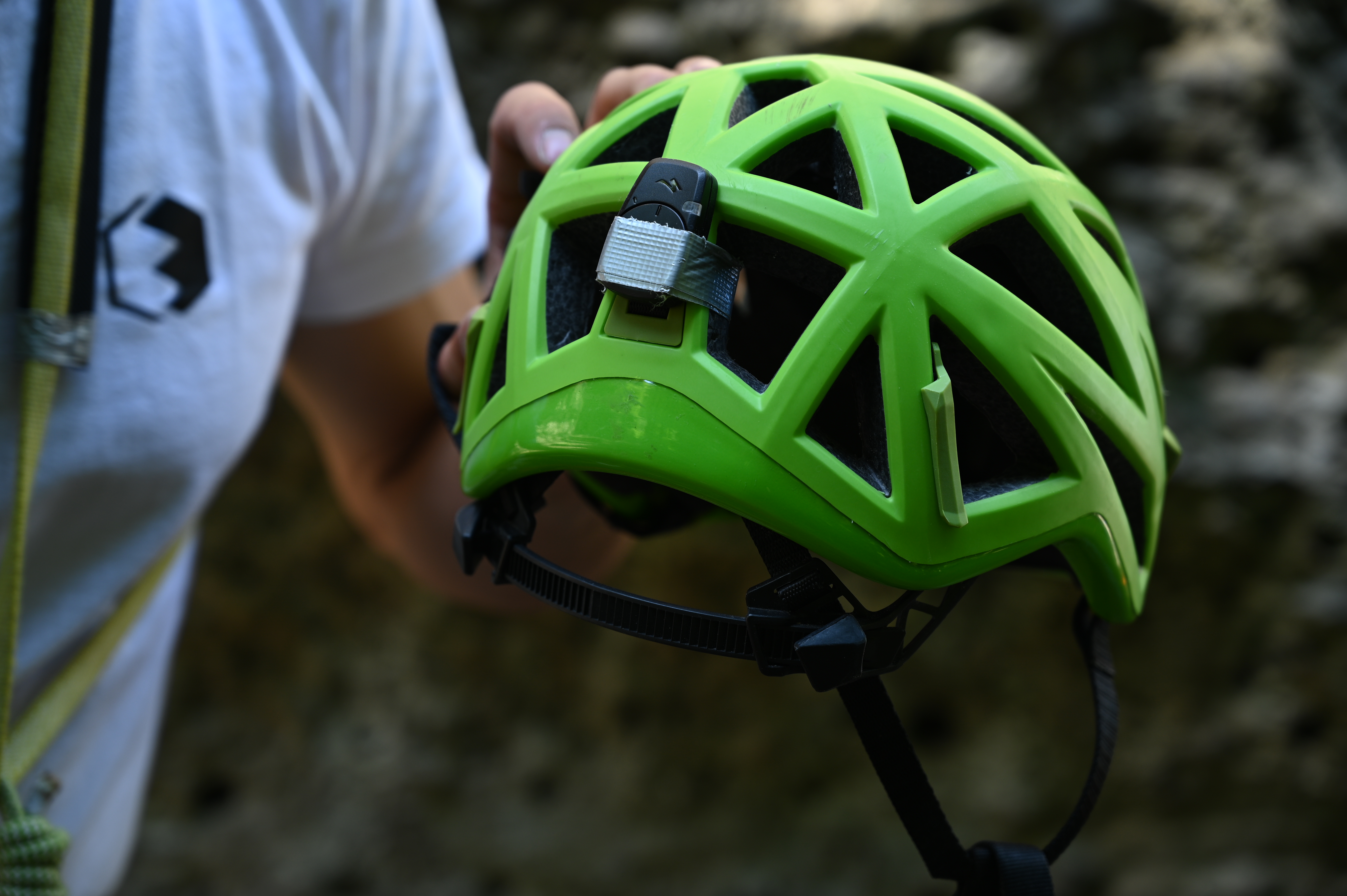 Having ‘observers’ close by while on a big climb may also help. And informing friends or family about my exact plan is also a must for me.

OK, I will be clear: I am anything but neutral when it comes to the REVO, as I used to work for Wild Country and have accompanied its journey from a first 2kg prototype to its commercial release.
But I have reflected quite a bit and have come to see it as the belay device that gets the closest to an ideal LRS device.

The only objection here is the fact that it hasn’t been designed for soloing. When I compare the scenario of a worst possible LRS fall to the norm test (EN 15151-1), I don’t see any obvious issues. The norm falls are also really hard ones, with the belay device hanging upside-down on a static anchor, arresting a high-factor fall of an 80kg mass of steel.
But the remaining uncertainties are well worth some sort of backup or redundancy (see next paragraph).
Experience shows us furthermore that the attachment of the device can be an issue. This is why I work with modified locking karabiners: 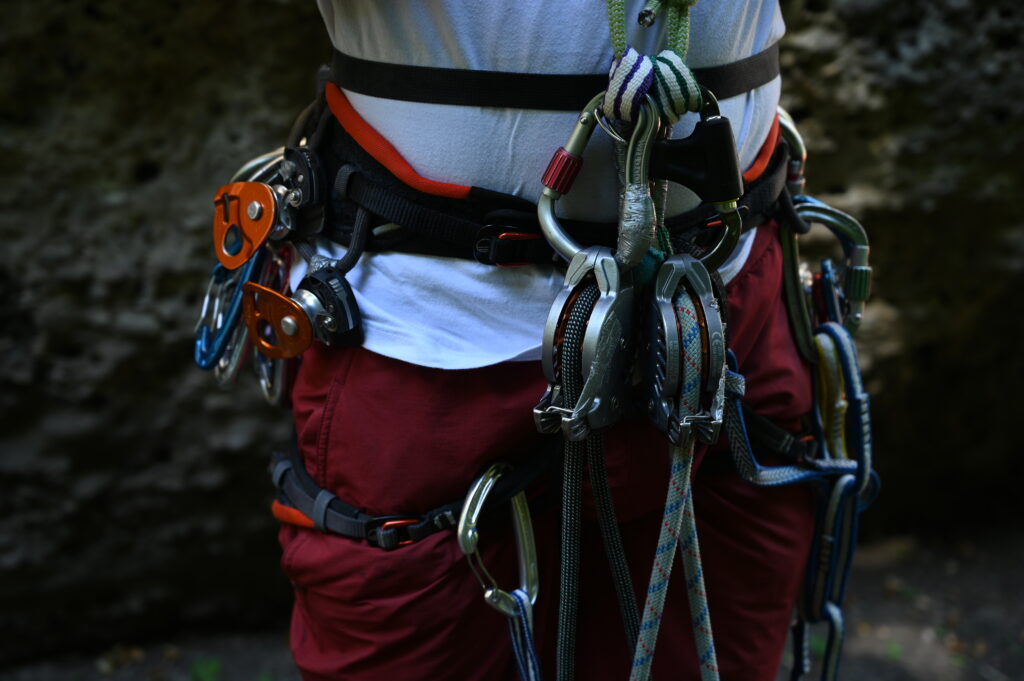 First of all, they shouldn’t twist (DMM Belay Master). Secondly, the REVO should be prevented from sliding over the bend of the karabiner. A rubber stopper or some tape solve the problem.

You may have noticed another small ‘modification‘: I use one or two layers of duct tape in order to prevent the REVO’s Tube Nose to engage on the side of the dead rope when pulling through slack too quickly or – much more likely, by getting caught on the rock or some gear while climbing.
This has clearly reduced unwanted REVO locking whilst it doesn’t prevent the REVO from locking in case of a fall.
A fall simply rips the tape apart and the Tube Nose engages just normally.
Please note that the REVO lock even if the Tube Nose was really prevented from rising (there is a second locking mode).

What do you do when you climb an alpine route with potential of sharp edges and rock or ice fall?
Or what do you do when you have to build an anchor on Friends? Even if you have a bomber splitter with a perfect placement for a .75 Friend, you will hopefully look for at least a second piece of pro.
So, isn’t it just logic to introduce a second rope to the LRS discussion?

So far, there was mainly discussion about backup systems (knots etc.), as – obviously – people do not trust ONE system 100%.
Backup knots have one big downside: they slow you down!
Or even worse, they may make a smooth rope management impossible.

Wherever we truly rely on a safety system, we work with systems that are rather redundant to the main system than backing it up while being dependent on that same.

Backup knots are serial, while a true redundant system needs to be parallel to the main system.

Two ropes and two REVOs are only logic to me:

I need a second strand of rope for abseiling/bailing out anyways.

Rapelling x times with swings, lateral movement of the rope while cleaning the route has never felt very comfortable to me, so having two strands doesn’t hurt.

Not having to worry about backup knots on lead and intermediary knots when rapelling saves me much more time than carrying an additional strand of rope costs me.

Only trick needed here: how to load the two REVOs to have both dead strands on one side.
Then I keep the two dead rope strands apart from the live rope by clipingp a quickdraw to them (which I attach to my right leg loop).

Maybe you have been wondering why I load the REVO this way (live rope near the body).
Well, the next clip shows why. This way you can abseil and then re-climb the pitch without any further manipulation.

LRS is all about mastering the details regarding rope management.

Avoiding twisted ropes is essential!
So, properly stack the rope in the backpack and you will be fed properly.
Keeping the two strands separated (with one finger or else by pulling them through two karabiners) while stacking helps a lot.

Reduce the risk of stuck rope ends by covering the end knots (anchor side AND dead end side) by a kitchen funnel. PE is ideal (doesn’t break so quickly), but I cover them with tape (think of safety glass…) anyway.

After lots of experimenting with multiple cache loops, I stick to one loop of approx. 3m and a free end, knotted off and covered by a funnel.
I fix two Micro Traxions to my harness with duct tape for one-handed cache-management. 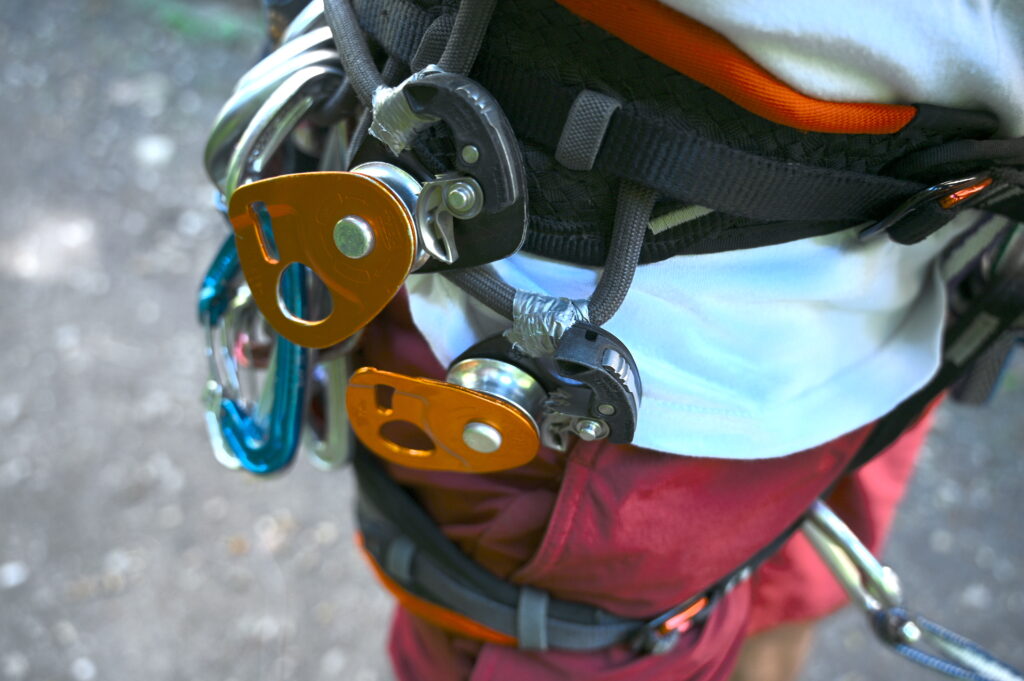 I have tested various kinds of solutions to the live rope drag problem: from slip knots and munter hitch, clove hitch on longer slings to self-made aluminum clips attached to some karabiners.
But none of these solutions has really convinced me. Either they were too slow to apply or they prevent the entire live rope’s lenght to stretch in case of a fall (important!).
I am looking for one gimmick that lets me clip/apply one-handed and fast.
I do have some ideas for karabiner modifications with a ‘rope drag brake’ but I doubt there is a market for such thing…

In any case I am looking forward to learning from feedback, questions and ideas!

I have come up with a seemingly easy way to solve the backfeeding-issue in a quick and one-handed way: adding some rubber (rings or bicycle tube) to the bottom part of a ‘belay HMS’ karabiner.

A first test has proven the system to work well for me. The handling can get smoother with time. Generally speaking, it is always easier to clip when your hip is close to the bolt’s height.